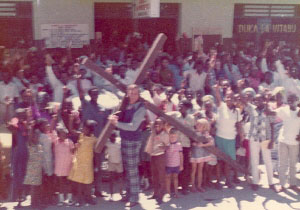 I carried the cross in Tanzania in 1974. It was an awesome crosswalk. I crossed the border from Kenya and carried the cross to Arusha and then Moshi, then on to Dar es Salaam. From there I walked east toward Zambia passing through Mbeya. This was a long walk, but a rich witness for Jesus.

It took almost two months to do this crosswalk. I preached in many churches along the way and met many beautiful people. In the market places I would arrive and stand the cross upright and then preach. I got local interpreters to translate into the local languages. The people were very responsive. We saw thousands give their lives to Jesus.

On this crosswalk my family was with me, including my children Gina, Joel, Joy and Joshua. We had a great time together. We had a Land Rover and a small camping trailer to live in.

Many people helped us along the way on this walk with the cross. The people were just beautiful and loving to us all and welcomed the cross.

One day as I carried the cross I saw a large herd of elephants in the bush. They were coming in my direction. In the lead was one huge elephant with large tusks. I wanted a photo of it and the cross. This area was getting the first paved road ever and it was new tarmac. I got out my camera to take the photo. The camera had no zoom so the approaching elephant was very small in the camera lens. I had propped the cross so I could see it and the elephant at the same time. I keep taking photos as it grew closer and closer. I know I was foolish but I wanted a great photo. Suddenly the elephant rose on its hind legs and let out a roar. He then charged toward me. I grabbed the cross and started to run but it was too late. With the cross on my shoulder I ran as hard as I could. Here came the elephant right behind me. However when he reached the new tarmac highway he stopped! He did not trust the pavement! Thank you Jesus. By the grace of God I made my escape! Sometimes God even covers our foolish mistakes.

Little Joshua got a worm in his foot. It is the kind that creeps up the leg. You can see it moving up the foot to the leg and up. We went to several doctors trying to get the worm killed but on it went. At Mbeya a doctor froze the area and the worm died. Poor Joshua, a few weeks earlier one of the doctors had cut his leg several dozen times where the worm was located!